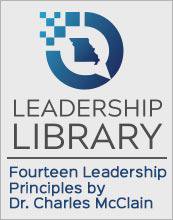 1) What is your suggestion about? This is an unusual recommendation because it’s not available online or in a bookstore. This is a list my old boss Dr. Robert Stein shared with me after his mentor, Dr. Charles McClain, passed away in 2015. Dr. McClain was a two-time commissioner of higher education, the founder of Jefferson College, the visionary who imagined that Northeast Missouri State University could be transformed into the state’s private liberal arts institution, and the hard-driver who turned that vision into reality at what we now call Truman State University.

The list describes McClain’s principles and habits. Rather than summarize it, I’m providing it here:

When Gov. Mike Parson made his first address to a joint session of the Missouri House of Representatives and Senate, he encouraged audience members to remember the leaders who have come before us, those who have left their mark. This is a good time to reflect on leadership that lasts, and Dr. McClain embodies that in my line of work. He not only survived the many difficult jobs he took on, his work has left the kind of legacy most leaders can only dream of.

3) What is a key takeaway for leaders driving improvement in how we deliver for the citizens of Missouri?

The last line may be the most important of all, and is worth reiterating: Take joy in being alive and feel blessed for the life you have been given.

We encourage comments that further our purpose of enhancing the management of state operations and may edit entries and comments to advance that purpose. Comments selected for inclusion will disclose the name of the commentator and the department where they work.