Make Your Bed: Little Things That Can Change Your Life…and Maybe the World 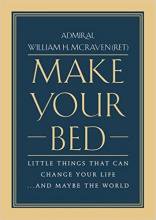 1) What is your suggestion about?

This book inspires you to change the world.

In Make Your Bed, Admiral William (“Bill”) McRaven offers 10 simple but profound pieces of advice for anyone confronting challenges and trying to drive change. He brings to life his advice with stories from his nearly four decades of military service – from his training to become a US Navy SEAL in the late 1970s to his service as a Four-Star Admiral and Commander of all of US Special Operations Forces globally.

The title comes from this book’s first lesson. The author learned in SEAL training to make his bed with discipline and perfection first thing every morning. This may sound trivial – but he argues that everyone should start the day by accomplishing even a simple task. No matter what may come later in the day, that accomplishment and structure reminds us that we “had done something well, something to be proud of.” Every day matters.

Bill McRaven is one of the most impressive public servants of the 21st century. After an illustrious military career that included overseeing the raid against Osama Bin Laden, Bill became the Chancellor of the University of Texas System.

The book is short. You can read it in one sitting. Bill’s writing is clear. His style is conversational: you feel he is speaking to you. His points are simple but powerful. For example, about standing up to bullies, he says: “If you want to change the world, don’t back down from the sharks.” Whether describing tragedy or triumph, his stories inspire. He appeals to our better natures.

I know how well Make Your Bed captures Bill’s qualities as a leader. (We served together in Washington, DC after 9/11 when he was a Navy Captain charged with responsibility for counterterrorism policy on the National Security Council staff at the White House.) He is confident and intelligent, to be sure, but is self-deprecating, humble, asks for others’ perspectives, and is never arrogant. He is a risk taker, but is also thoughtful and strategic. He challenges others, but he does so to build a team and make people better. He is a dedicated public servant who is willing to make tough decisions and also roll up his sleeves to get the job done. And, most important, he never forgets the value of public service and those who commit themselves to changing the world.

3) What else do you want to tell us about it?

The book is based upon Bill’s commencement address to the University of Texas Class of 2014. The video of his speech went viral and has been watched millions of times. Many of you probably have watched it already. Check it out to get a sense of Bill and the book.

Make Your Bed adds many more stories — from his career to his commencement address. You learn about Bill swimming with the sharks off the Californian coast, how he used to visit Saddam Hussein in his cell every day after Hussein was captured, and how he and other leaders confront the most difficult challenges.

Don’t think this is a book of “feel good” platitudes. Read it and think about it. The book conveys hard-earned truths through Bill’s stories.

Bill is not naive. For him, life can be unfair, even tragic. “Change is never easy.” Setbacks are the norm. Failure is inevitable if you commit yourself to doing good. You can only succeed as part of a team and by respecting others.

Bill is what you could call a “realistic optimist:” He has seen the best and worst in the world, but he believes that we can change for the better.

4) What is a key takeaway for leaders driving improvement in how we deliver for the citizens of Missouri?

Bill McRaven reminds us all of our power to change the world. That may sound overblown. How can individuals make a difference?

His last chapter is entitled “Never, Ever Quit!” Good advice.

We encourage comments that further our purpose of enhancing the management of state operations and may edit entries and comments to advance that purpose. Comments selected for inclusion will disclose the name of the commentator and the department where they work.